I had been dreading last week ever since I found out that Matt would need to be traveling to the Baltimore and Washington DC area in connection with a show he was curating out there. He doesn’t travel much, and I never particularly enjoy him being gone, but it felt particularly intense for him to be gone right now, with Atticus still so little.

He had to be there for a couple days, but then he also asked if it would be alright for him to stay for an extra day or two to take advantage of the myriad of museums out there, and I agreed – it would be so sad for him to be so close but unable to enjoy all of the great art and culture in the area, plus my dad and brother live out there, so he’d be able to spend a bit of time with them. I knew it was a great opportunity for him, but still – I was dreading it.

But we survived! We did school… 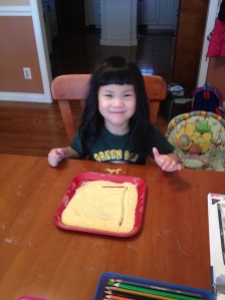 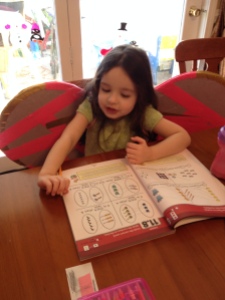 Along with some friends from church, we took a tour of a local fire station! 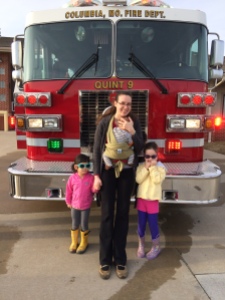 My friend Rebecca joined us there and at our house for a couple days, which was such a blessing. 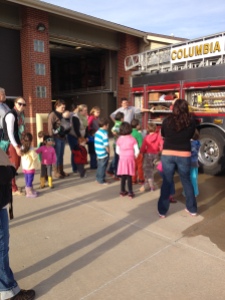 She held Atticus, engaged with the girls, did dishes, provided adult conversation for me, and was just generally helpful and encouraging. One of the biggest challenges for me when Matt goes out of town is just feeling alone, and it was so nice to have Rebecca there with me!

And my friend Liz came over with her two little boys one morning to play and hang out and chat.

And then my mom came for the weekend, which was so, so nice! 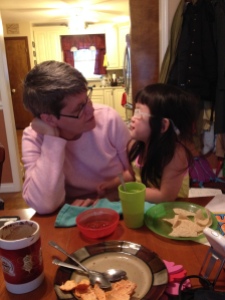 We’re all always thrilled when Grandma comes for a visit 🙂 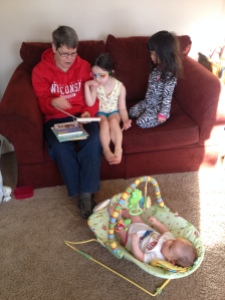 I didn’t get tons of quality time with her – evenings were more like, “Okay, the girls are in bed and I’ve fed Atticus; can you keep him so I can take a shower?” than, “Let’s sit down and enjoy our ice cream and have leisurely conversations.” But still, it was good to see her 🙂

And pretty much before we knew it, Matt was home! Phew!

There were a few rough patches. Dinner was pretty late on the one evening we didn’t have anyone here with us. I didn’t get as much sleep as usual – Atticus is usually a great night-time sleeper, but he had a couple nights that were rougher than normal, but even those weren’t too bad. There were times I struggled to be patient and kind while feeling pretty worn out. But ultimately, we survived! I know there are parents in military families and single moms who do this all day every day, and to them, I tip my hat – because as a mom of 3 kiddos under 5, one of whom is just barely 2 months old, just making it through 4 days of life without my husband (and with lots of help) felt like quite a triumph!