On Saturday, November 29 at 3:01 a.m. we became a family of five as we welcomed little Atticus Garrett into the world 🙂 He was 8 lbs. 2 oz. and 21 inches long, and both he and I are healthy and doing well! 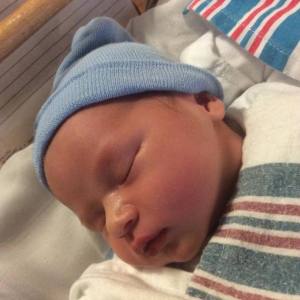 As I’ve mentioned, I’d been having intermittent contractions since about 34 weeks, but they’d never had much strength and had never developed into a pattern. I’d been excited to be 1 cm dilated when I saw my doctor just shy of 37 weeks but a little more discouraged as that stayed the same for the following 2 weeks. We just hung in there, though, continued working on our household projects and hanging out as a family, and Atticus and I continued to grow! Here we are on Thursday evening at 39 weeks and 2 days.

I was really praying that labor would start spontaneously on Friday or Saturday. More important than my growing pregnancy discomfort, the real advantage of going into labor then was that my mom and my brother David were in town celebrating Thanksgiving with us, and it would be so easy for them to stay with and care for the girls. And my mom was hoping to be able to stay with us and help out for a while after Atticus’s birth, but if we hadn’t gone into labor by the end of Thanksgiving weekend, it wouldn’t necessarily make sense for her to stay and hope he arrived in the next couple days, because he could just as easily wait another 10 days or so.

But sure enough, on Friday morning contractions started to come with a bit more strength and frequency. After a couple hours of that, I was thinking that this might really develop into labor, so we finished packing our bag and had everything ready to go, just in case. Most of Friday was spent waiting to see if labor was really going to take off. My contractions were about 45 seconds long and about 4 minutes apart for most of the day, but they weren’t intense at all, so we opted to stay at home and wait to see what developed.

Matt and I went for a walk around 5:00, and soon after we got home, the intensity of the contractions increased significantly, and they were more like 1 minute long about every 3 minutes, so around 6:30 we decided it was probably time to head to the hospital. I didn’t feel like delivery was imminent, but I had tested positive for group b strep, so I’d need a round (or, ideally, two) of antibiotics, and since we went from recognition of being in active labor to actually giving birth in about 6 hours with Miranda, and subsequent labors are generally shorter than a first labor, it seemed like a good idea to go in.

Once we got to the hospital, though, labor pretty much stalled out. I was still having contractions, but they weren’t anywhere near as strong as they’d been at home, and the nurse said I was still only dilated to 1 cm, maybe 2 cm. I was pretty discouraged and rather frustrated with my body. We stayed in the triage area for a couple hours, and contractions did start to pick up in intensity again, and my cervix dilated to 3 cm, and ultimately the doctor decided to go ahead and admit us. It seemed like if we weren’t yet fully in active labor, we were heading in that direction, and they were a little concerned about Atticus’s heart rate – initially it wasn’t having as many spikes as they would have liked to see.

It didn’t seem like things were progressing super quickly, though. My friend Brooke had come to the hospital with us to be an additional labor support person, but she went home at that point – nothing was super intense, and none of us thought things would take off immediately, so there was no reason for all of us to sit there getting no sleep and just waiting for something to happen! Because of the concerns with Atticus’s heart rate, the doctor really wanted me to stay hooked up to the monitor, so my mobility was pretty limited, so Matt and I just watched a bit of Netflix while we labored through those moderate contractions.

Around 1:30 the doctor came in and said they were more concerned with Atticus’s heart rate. It was dipping after contractions even after I’d changed positions earlier, so she wanted to break my water so that they’d be able to use an internal monitor to track contractions more precisely. I wasn’t super excited at that prospect, but she explained that we really needed to see whether his heart rate changes were reflecting distress, and if so, get him out quickly, so the choice was that we could either do a c-section for an immediate delivery or break my water so we could get more information about what was happening, and she was recommending breaking my water. Faced with those alternatives, we chose to go with her recommendation and have her break my water. Situations like that are why I am grateful for the opportunity to give birth in a hospital. Birth is a natural process that women and babies have been experiencing for hundreds and thousands of years…but sometimes things go wrong, and I’m thankful we were able to get a greater understanding of what was happening and make informed decisions to help both Atticus and me have a healthy birth.

The doctor broke my water around 1:45, and she said my cervix was dilated to 4.5 or 5 cm at that point. My contractions started getting more intense then, but I still thought we’d have a while left to labor.

As it turned out, though, everything progressed pretty quickly from that point on. My nurse came in around 2:40 and asked if I wanted her to check my cervix, if I thought I was transitioning, and I said no, but just 5 minutes later I thought things were changing, and it would be a good idea. At 2:50 I was dilated to 7 cm, and my nurse, who was wonderful, suggested that I stay in the bed and that the NICU team (who would be at the birth because there had been meconium in my water when it was broken) stay in the room, in case Atticus came really quickly at that point.

And that, in fact, is what happened. I told Matt he should call Brooke and tell her she should come back if she wanted to, but she might miss his birth even if she hurried, so he made a quick call in between the peaks of contractions. The contractions picked up even more, coming right on top of each other, and they felt incredibly powerful, and I could feel Atticus moving lower. Everything sped up dramatically and felt so intense. I was telling everyone that he was coming, and I wasn’t getting a break between contractions, and I thought I might throw up, and doctors and nurses were getting ready for him to be born and saying I was at 8 cm and then at 9 cm, and he kept getting closer and closer, and I was telling them that I wasn’t pushing yet, he was just coming. It was all the emotions of transition combined with the crazy physical intensity of transition and the pushing stage all put together.

The doctor told me I really just needed to take one big breath and hold it and push, and he’d come out. It took me a minute to focus, but once I was able to do it, his head came right out. Then they had me pause while they cleared out his mouth and unwrapped his cord from around his head and hand, and then with the next push he was completely out, and it felt amazing. I was so happy to have our little guy here, and those 11 minutes of going from 7 cm to giving birth had been some of the most intense of my life, and it was such a relief to be through them.

We’ve been able to spend the last couple days beginning to recover from birth and getting to know our little guy. He is so precious. As I expected based on his patterns of activity while I was pregnant, his most awake, active, and hungry period of the day seems to be between midnight and 5:00 a.m., which is not entirely ideal, but hopefully we can get his schedule adjusted fairly soon! He enjoys running through various facial expressions, staring at bright lights, and most of all, snuggling with us, which we love at least as much as he does 🙂 He and I are figuring out breastfeeding – it has been 4.5 years since I’ve nursed a newborn, and he is less focused and more prone to spitting up than Miranda was – but my milk has come in, and overall, it seems to be going well!

The girls are also loving having him here with us. They talk about how cute and sweet he is, ask to hold him or to sit with me while I hold him, have innumerable questions about him, and enjoy stroking his hair while he nurses. They have been somewhat thrown off by all the changes and the diversion from their normal routines, but they’re hanging in there and handling it all pretty well.

Matt has been able to spend some good time with Atticus and me and with the girls during the last couple days, and he even got a chance to make a beautiful digital drawing of our little guy. You can read some of his reflections here.

We’re so thankful that my mom and my brother David were able to be here to help out and that my mom is staying through the week to help us as we transition into life as a family of five. 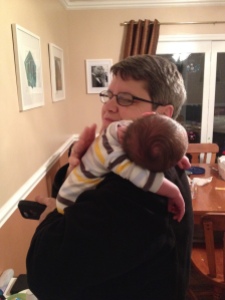 Overall, I am sore from birth and completely exhausted, since I haven’t gotten more than 2 consecutive hours of sleep in the last 3 days. But what I feel most is blessed and thankful. This pregnancy and birth have not been easy, but they brought us a beautiful baby boy, who will be a tremendous blessing to our family, I’m sure. These coming weeks of adjustment are going to be a challenge, but they’ll be worth it. I have an amazing husband with whom to partner in this adventure of raising all of these children, and we’re all enjoying the ride!