The Great Road Trip of 2015 was so great that it is necessitating multiple posts, in order to avoid any one post becoming so lengthy that even my family doesn’t want to finish it 🙂 If you missed part one, you can check it out here.

As our time in Virginia came to an end, we piled back into our car and headed to Washington, D.C. for a couple days. Danny and Sharon had asked if it would be possible for us and for her family to meet during this trip so that we’d all have an opportunity to get to know one another a bit before the wedding next spring. I’ll admit that I was somewhat nervous about how it would go to have so many people packed into one apartment for 2 nights, but it all worked out!

We arrived in the city on Friday afternoon and were treated to a motorcade passing in front of us at an intersection – Danny and Sharon guessed it most likely belonged to Vice President Biden.

After getting settled into Danny’s and Sharon’s apartment and having lunch, we headed out for an afternoon of sightseeing. We opted to travel by metro, much to the girls’ delight!

She replied, “Because I’m just so happy that the train is moving so fast that I have happy tears.”

Asked later, both girls said that their favorite part of the day had been the train ride.

However, we were also able to take in some other noteworthy sights! Our first stop was, of course, the White House!

Moments after we took this picture, security guards asked everyone to back off across the street. 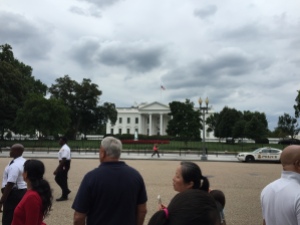 They didn’t tell us why, but Danny and Sharon said they’d never seen that happen before, so something interesting was probably going to happen. We could see snipers on the roof.

We waited around for probably about half an hour and were just getting ready to move on when we heard a helicopter flying overhead. We were able to see one helicopter fly behind the White House to land… 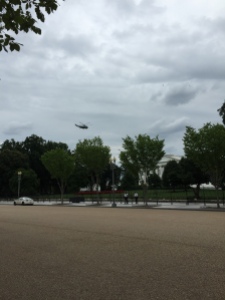 …another take off from behind the White House…

…and another fly by off to the side.

Apparently any time the President is flying in a helicopter, there are also 2 decoys that fly nearby to provide added security for him. We definitely enjoyed getting to see that! But then we headed to our next stop, the Washington Monument.

We would have loved to see more of this awesome city, but the girls were getting tired, and it was approaching dinner time, so we headed back to the train…

…in which we managed to fit 5 people into one seat, which was highly entertaining to my mother 🙂

The next day we spent relaxing at Danny’s and Sharon’s apartment and at their pool. 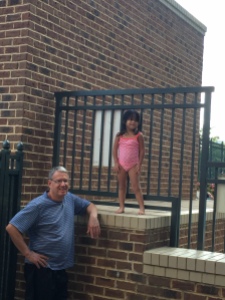 And we did indeed get to meet Sharon’s parents, who are lovely people 🙂 I’m really thankful that, just as I married into a family of people I genuinely like, it seems like Danny will be marrying into a family with great people. Unfortunately, I apparently considered the day to be so relaxing (I actually took a nap! by the pool!) that I failed to get a single picture of us hanging out with them! We really enjoyed the time with them, though, and it was nice to meet in person in a low-key environment.

Sharon’s mom, Patti, actually suffered a stroke just 2 days after our meeting. She seems to be recovering incredibly well, which is a huge answer to prayer, but if you are a praying person, I’m sure she would appreciate continued prayers, as she has a long road of recovery. We’re looking forward to seeing both her and Sharon’s dad again next spring at the wedding!

After Sharon’s parents left, we just hung out at the apartment for the rest of the evening and enjoyed our time together. Atticus, in particular, enjoyed their sweet dog, Dixie 🙂 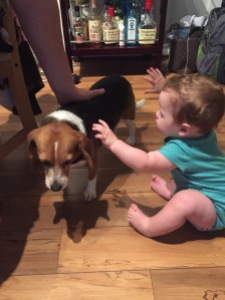 I'm Alison, wife to one great guy and mama to four precious kiddos. My days are spent loving and caring for those 5 and anyone else God brings into my path, and as I read books and explain math, wipe noses and change diapers, teach and pray, correct and celebrate, I also contemplate and share my thoughts in this space. I'm so honored that you're here!