It’s the middle of July, so we’re about halfway (or more!) through the summer, so I thought it would be a good time to take a look at how I’m doing with these summer goals! See my initial thoughts about this season’s goals here.

1. Work with the girls on moving toward learning how to swim.

Yes! We joined a pool, and we’ve been going multiple times every week, weather permitting. Both girls did great with their swimming lessons and definitely grew in their comfort with being in the water. Miranda in particular has been growing by leaps and bounds even since then. Earlier this week she was celebrating her ability to put her head under the water unasked and without plugging her nose by doing it over and over again. I’m really happy that they’re making progress toward swimming, and we’re all enjoying our pool time!

2. Be consistent in working with the girls to develop self-control, kind words, and gentle hands.

We’re working on it! One encouraging development has been that we’ve been having some times in which the girls are really playing well together without my constant refereeing. I’ve been honest about the fact that we’ve been in a difficult season of parenting, and it has been very encouraging to me to see these glimmers of hope.

3. Work through 4-6 weeks of school curriculum.

We’re doing pretty well with this! Our summer has been pretty laid back so far – on most days we work through half of a day’s worth of curriculum, so we’re almost halfway through our 3rd week, which puts us on track to have about 4 weeks finished by the end of the summer. I’d love it if we were closer to having 6 weeks done, but really, we’ve been enjoying our weeks of summer, and we’re all learning and growing, so I’m not going to sweat it 🙂

We’re working on this – in actually a much bigger way than I’d anticipated. I mentioned to Matt one day that I had an ideal vision in mind of what I’d like to do, but I wasn’t sure what to do in the meantime. When I told him about what I really wanted to have long-term – essentially floor-to-ceiling built-in shelves in the playroom – his immediate response was that we should just build that now! 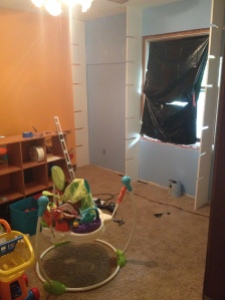 We (and by “we” I really mean Matt) are actually quite a bit farther along than this picture shows. It’s all coming together really nicely, and it’s going to be such a huge help to me!

See above! Right now the room looks like a total disaster – toys piled on top of each other, tools all around – but we’re making real progress, and I’m excited about the room’s potential.

I have pretty much dropped the ball on this. Between the playroom bookshelf project and doing some extra work to train a friend who is starting to work for my company, our last few weeks have been very full, and there just hasn’t been much free time. I’m hoping to get a few more posts written during the last half of the summer, though!

7. Read more, in particular the parenting books I ordered this spring.

I’m working on this one! After finishing No Drama Discipline, I started Ruth Beechick’s The Three R’s, and I finished that a couple weeks ago, and I’ve now started How to Talk So Kids Will Listen & Listen So Kids Will Talk, which I’m enjoying. Matt bought me Wish You Happy Forever: What China’s Oprhans Taught Me About Moving Mountains for our anniversary, so I’ve also been reading that. Its author founded Half the Sky, an organization that worked in the orphanage Madeleine CaiQun lived at, and I’m so thankful to them for the benefits I know she received from their care. My heart is feeling increasingly drawn back toward adopting from China again.

We’re definitely having fun this summer! Spending time at the pool has been a big way in which we’ve been doing that, but we’re also having popsicle picnics on the porch, reading books, doing science experiments, and just playing together. This afternoon the girls and I rolled around on the living room floor, and I tickled them and gave them airplane rides – we all had a blast simply playing, and this evening at dinner all of us listed that as the “high” from our day.

Of course there is always more I could be doing to enjoy our little guy, but I think I’m doing a pretty good job of taking time to snuggle him, play with him, laugh with him, and generally enjoy him. He really is such a sweet little boy, and even though parenting kids over a larger age range feels like more of a challenge than just having our close-together girls, this boy is such a blessing for our family, and I’m so thankful he’s here.

10. Write in each child’s journal at least once.

So far I’ve written in Atticus’s journal but not the girls’ – I need to get to theirs soon!

11. Finish writing and sending thank you notes to people who blessed us around the time of Atticus’s birth.

I’ve written a few more of these but still have a lot to do.

We did this in June, and we’re scheduled for another date night this week, so I just need to plan one more for July, and we’ll have hit this goal for 2 months in a row!

We’re working on this! Thus far it hasn’t been so much of a replenishing of savings as much as earning enough to keep up with the playroom update expenditures, but we’ve been able to do that, so I think it’s a win so far, and I think by the end of the summer we will have been able to put more money away in savings.

Honestly, working toward this goal has been one of the most encouraging parts of my summer. I think, as a mom of littles, I am constantly seeing new areas in which I need not to let the “perfect” become the enemy of the “good.” What I would like for my prayer life is to have a long period of totally uninterrupted time each day to read my Bible and actually write out prayers to God in a prayer journal. That just isn’t going to happen right now, but that doesn’t mean I should throw in the towel. I realized that I do have multiple periods of the day that are quiet and somewhat solitary – when I’m nursing Atticus before he takes naps and goes to bed at night. After he would start to drift off to sleep, I’d been using those times primarily for checking my Facebook feed, but, wonder of all wonders, when I made Facebook less of a priority, there was more room for prayer! I’ve also been re-reading David Powlison’s Seeing With New Eyes with some friends, and I’ve found his words about prayer to be particularly helpful and encouraging. I’ve also been faced with daily reminders to pray as a young man from our church came down with a sudden illness a few weeks ago and had to be life-flighted to a hospital 2 hours away and is still fighting for his life there, and our church family has been praying for him continuously. I’m praying more often with more depth and am feeling anew my dependence on God and the contentment that comes with that realization.

Overall I’m pleased that I’ve been able to make progress (or recruit my husband to make progress!) on a number of these goals, and hopefully I’ll have more progress to report at the end of the summer!