And oh, what a joy he is! He is incredibly good-natured. Even this past weekend, which he celebrated by coming down with the ill-health trifecta of a cold, pink eye, and a double ear infection, he remained pleasant throughout.

He loves his sisters something fierce and always wants to be in on the action.

He also has a great time hanging out with his buddy Ransom, who spends two days a week with us while his parents are at work. Ransom is about 3 weeks older than Atticus, and the boys very much enjoy each other. They swap toys, crawl all over each other, and generally have a good time together 🙂

Atticus crawls like a boss, and we’re all just waiting for him to take that first step. He cruises all over the house, and he’s willing to stand for about 10 seconds without holding onto anything; he just isn’t willing to take that first unassisted step yet! It could come any day…or it could still be a while. Either way, it’s all good 🙂

One thing that’s very different for me this time around, with Atticus as my third child, than it was with the girls is that I have a greater sense of perspective. I don’t sweat the small stuff so much. At some point he’ll walk. At some point he’ll talk. Obviously I have a general sense of when those milestones should happen, and should it seem like he needed extra help, I’d be the first to pursue that for him, but I’m more focused on enjoying the little guy than I am on tracking his accomplishments.

Of course, there’s less time to devote just to enjoying him since he is our third baby, but he seems to enjoy simply being a part of day-to-day family life, and we’re glad to have him as a part of it. He crawls around while we do our school reading, he screeches back at the girls when they get upset and yell about something (this is not always so well received, let me tell you!), and he makes himself right at home in the playroom.

Of course, being a 10-month-old boy, he also gets into a fair amount of trouble. The photo above was taken seconds before he transferred that chalk to his mouth. He’s constantly destroying some magna-tile creation the girls have been working on and pulling books and DVDs off the living room shelves and generally making it difficult for me to check items off my to-do list. But that’s what 10-month-old boys do, and this too shall pass 🙂

That’s what we tell ourselves about the lack of sleep, too! This one was a bit of a surprise to us. Both of our girls regularly woke up in the night for years, but they’d want something (milk, snuggles, reassurance), and as soon as it was provided, they’d go right back to sleep. But this little guy? About once a week, he wakes up in the middle of the night ready to play! To his great credit, Matt is willing to get up with him most of the time, but I’ve taken enough of those middle of the night wake-up calls to know that their effects on our ability to function the next day are real! Atticus is always happy to play, sometimes to poop, and then eventually go back to sleep, but still – we pray for those nights to be few and far between. This is the sight we like to see 🙂

We recently moved Atticus into his own room – he’d been sleeping in our room up until a couple weeks ago – which has helped a bit, but we’ve still had some rough nights. But like I wrote above, this time around, we do have more perspective. Eventually he’ll sleep through the night, and really, it won’t be all that long before we get to that point. Until then, we try to get to bed a bit earlier and just love the little guy well through it all 🙂

And although I’m not obsessing about milestones, I do look forward to hearing his thoughts when he starts talking. There have been a lot of “mommommommommom” exclamations recently, but I don’t think there’s conclusive evidence that he really links that word to me. Maybe soon 🙂

I have to say, these 10 months have gone by incredibly quickly. It’s hard to believe that it was a whole 10 months ago that this little guy made his entrance into the world, and I was snuggling his 8-pound little burrito self, and now here he is tipping the scales at 23+ pounds, crawling and cruising around the house, on the verge of walking and talking! And while there are milestones to which I really am looking forward (talking and dropping the morning nap being the big ones), I’m trying hard not to wish away these baby days with our sweet boy.

Happy 10 months, baby boy! We are completely in love with you and totally enjoying life with you 🙂 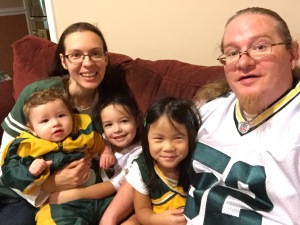